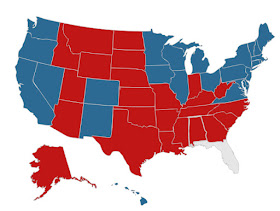 ...was because of immigration and Latino/Hispanic voters. America is getting darker, not whiter.

I'm from Texas and we get this. George W. Bush understood this with his "compassionate conservatism." And so did Rick Perry, our current governor.  You may have noticed that Rick Perry, while being a Tea Party favorite, articulated a moderate stance on immigration during the GOP primaries. Because he's from Texas and knows the score. And yet, Perry was blasted from his right by Mitt Romney.

I think at that moment the election was sealed, demographically speaking. George W. Bush won 54% of the Hispanic vote in 2004. Mitt Romney? He won 27%. The lowest for a GOP nominee in a generation. This despite the growth of the Hispanic electorate between 2004 and 2012. I get the Tea Party stance on small government. I dig their libertarian sensibilities. But their antipathy toward people of color cost them this election.

I think Mike Huckabee nailed it last night on Fox News. GOP efforts at reaching out to people of color have been "pathetic." And why is that? As I've written about before, I think the GOP has an ethnocentrism problem. It is a party that struggles with "generalized prejudice" toward outgroup members. Case in point: Bill O'Reilly on Fox News last night effectively called all people of color lazy slackers and moochers, people who want handouts and "stuff."

That, in my opinion, is what needs to get fixed in the GOP. The moderate "compassionate conservatism" needs to make a comeback.
Richard Beck at 10:59 AM
Share