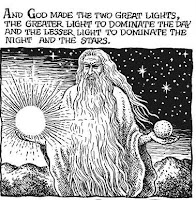 When you illustrate the book of Genesis the first choice, I'd guess, is how you choose to draw God. Will God be a voice in the sky? Or should God look like a person? And what kind of person?

Perhaps not surprisingly, in The Book of Genesis Illustrated Crumb goes with Michelangelo, choosing to illustrate God as an old man with white flowing hair and beard. This is, I'd guess, the way most people picture God: the Old Man in the Sky.

Interestingly, Crumb hints at how his image of God was influenced, perhaps unconsciously, by his own father. From David Hajdu's book review in The New York Times:

Early in his progress on “The Book of Genesis,” Crumb was asked by Robert Hughes of Time magazine if he was drawing God to look like Mr. Natural (the burlesque cartoon shaman whom he has long employed to poke fun at pop spirituality). Crumb replied: “He has a white beard, but he actually ended up looking more like my father. He has a very masculine face.” Both paternity and masculinity are matters of dubious value to Crumb, a wonderfully unlikely candidate to breathe new life into the founding narrative of masculine privilege and paternal authority in the Judeo-Christian world.

Crumb’s God appears, alongside the opening words of Genesis, spinning substance from a void that resembles a cosmic basketball in his enormous, hairy, veiny hands. He is a profoundly — almost grotesquely — human-looking deity, very much the sort of being in whose image vulgar humankind could realistically come forth. His nose has the elongation of age (and an implied proto-Jewishness), and it is dotted with deep pores. His brow is furrowed in a permanent scowl, unchanged throughout the book. (In one of the chapters about Noah, Crumb has God scowling even as he pets a goat.) He wears a long white robe and, over it, a longer white robe of billowing, gentle tresses that flow from his scalp and his face to what would presumably be his feet.

I don't know what kind of relationship Crumb had with his father, but if his depiction of God is any indication I think they had some issues. Crumb's God isn't very lovable. As mentioned by Hajdu, Crumb's God has an angry scowl permanently affixed to his face. Even here, when God looks at his finished creation and sees that "it was very good", he looks upset: 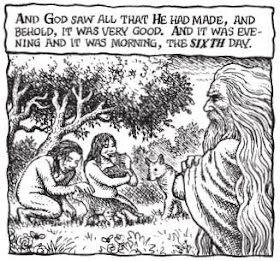 So what is Crumb up to? Is his God just an Oedipal projection? Some unfinished business with his dad? Or something else?

I think Hajdu is right in pointing out that Crumb has some strong feelings about "masculine privilege and paternal authority in the Judeo-Christian world." A hint of Crumb's feelings about The Old Angry Man in the Sky comes from his brief introduction to the book. In speaking about his feelings regarding the divine inspiration of the bible, Crumb states that he finds the bible to be an "inspired work," but solely from a literary standpoint. For Crumb, the bible is a fully human product. More, Crumb believes that the bible was used as a form of social and political control, a book written by men to keep men firmly on top. Crumb writes:

Many scholars, examining closely the tersely worded chapters of Genesis, perceive in them earlier and lost meanings and intentions, things that had been altered by the increasingly entrenched priests, and the triumph of patriarchy over an ancient and ever more dimly remembered matriarchy.

In short, it seems that Crumb's depiction of God may have familial (Crumb's own relationship with his father) and political (a critique of patriarchy) origins. And the two are often related to each other. Issues with fathers, male privilege and God can create a combustible mix. Legitimately so, as the Judeo-Christian world is solidly patriarchal. Consequently, Crumb's illustration of God is anything but "straightforward" as he claims. The God in Crumb's book is unattractive and a grumpy bully. He is oppressive patriarchal power personified. You aren't supposed to like this God.