That was the headline from the New York Times that greeted Americans in December of 1927. Freud had just published his provocative analysis of religious belief in his book The Future of an Illusion in which he suggested that religious superstition will give way to a more modern and scientific view of the world.

And not much has changed since 1927. We still see headlines and book titles like this. The End of Faith. The God Delusion. Breaking the Spell. 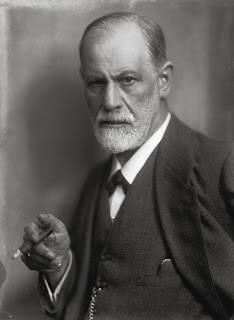 But was Freud right?

In The Future of an Illusion Freud makes the argument that religious belief is, at root, a means to repress and assuage anxiety in the face of a cold, hostile, impersonal and forbidding universe. Freud writes:


There are the elements, which seem to mock at all human control: the earth, which quakes and is torn apart and buries all human life and its works; water, which deluges and drowns everything in a turmoil; storms, which blow everything before them; there are diseases, which we have only recently recognized as attacks by other organisms; and finally there is the painful riddle of death, against which no medicine has yet been found, nor probably will be. With these forces nature rises up against us, majestic, cruel and inexorable; she brings to our mind once more our weakness and helplessness...

According to Freud we cope with these feelings of "weakness and helplessness" by creating a set of consoling religious beliefs:


And thus a store of ideas is created, born from man’s need to make his helplessness tolerable... Here is the gist of the matter. Life in this world serves a higher purpose... Everything that happens in this world is an expression of the intentions of an intelligence superior to us, which in the end, though its ways and byways are difficult to follow, orders everything for the best that is, to make it enjoyable for us. Over each one of us there watches a benevolent Providence which is only seemingly stern and which will not suffer us to become a plaything of the overmighty and pitiless forces of nature. Death itself is not extinction, is not a return to inorganic lifelessness, but the beginning of a new kind of existence which lies on the path of development to something higher… In the end all good is rewarded and all evil punished, if not actually in this form of life then in the later existences that begin after death. In this way all the terrors, the sufferings and the hardships of life are destined to be obliterated.

No doubt you are familiar with this argument. Since that New York Times headline in 1927 this argument has been a staple in the debates about the origins and function of religious belief.

But was Freud right?

That's a really hard question to answer. Which is one of the reasons why I think Freud's line of attack has proved to be so durable and unsettling. How could you go about evaluating Freud's claim?

Could you, for instance, walk up to people at your church and say, "Hey Sally, let me ask you a question. Do you believe in God because you're afraid of death and your eventual extinction?"

Your social skills aside, could Sally even answer that question? Honestly and truthfully? Could any of us?

And what if Sally did say "No," would you trust her answer?

As I point out in The Authenticity of Faith this is what makes Freud's argument so powerful and insidious. Freud effectively impugns the motives of the witness. By appealing to unconscious fears and defense mechanisms the believer no longer knows his or her own mind. After Freud, you don't trust Susan's answer. Or even your own. You lay awake at night wondering, "Am I fooling myself with all this religious stuff?"

This is why, I think, no one has made much progress on evaluating Freud's assertions. From 1927 to the present no one had figured out how to get around this data collection problem.

But I think I might have figured out a way to make progress on this question. Which why, when I have fits of vanity, I think the The Authenticity of Faith represents a change in what has been, since 1927, a static and tired debate. The Authenticity of Faith describes a method of cracking the Freudian nut along with some preliminary research aimed at answering the question "Was Freud Right?"

So was Freud right?

Well, the answer is complicated. You'll have to read the book. Let's just say that Freud wasn't all wrong. But he also wasn't totally right.
Richard Beck at 5:00 AM
Share