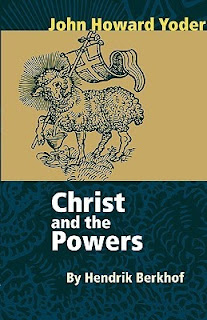 Since the publication of Reviving Old Scratch, I've been in a lot of discussions about how we should think about "the principalities and powers."

As a liberal and progressive Christian I blame the powers--organizations, nations, states, institutions, bureaucracies, power hierarchies, economies, political structures--for just about everything that is wrong with the world. The powers are evil, demonic, satanic. And no doubt that's a key part of the NT witness. The Powers were and remain antagonistic to Christ and his Kingdom.

As it says in Ephesians 6.12, our fight is not against flesh and blood but against the principalities and powers.

And yet, in light of the work of Hendrik Berkhof in his book Christ and the Powers, I've come to moderate my position a bit in regards to the powers. I wrote about Berkhof's work in 2013 and want to summarize it again here.

To start, Berkhof wants us to consider the creational goodness of the Powers. To be sure, like I said, the powers are hostile to Christ. But that doesn't mean the Powers are wholly evil and serve no good purpose. According to Berkhof the powers give structure and order to creation. And while this order and structure might be hostile to the kingdom of God, this order is preventing a slide into a greater chaos and disorder.

This is an argument that people like me need to wrestle with, which is why I'm revising this topic today.

Berkhof grounds his creation theology of the powers in Colossians 1.15-17:


The Son is the image of the invisible God, the firstborn over all creation. For in him all things were created: things in heaven and on earth, visible and invisible, whether thrones or powers or rulers or authorities; all things have been created through him and for him. He is before all things, and in him all things hold together.


It strikes us as strange that Paul can speak thus positively of what he elsewhere calls "poor and weak powers of this world" or "precepts and doctrines of men." Yet it is not so strange. Divers human traditions, the course of earthly life as conditioned by the heavenly bodies, morality, fixed religious and ethical rules, the administration of justice and the ordering of the state--all these can be tyrants over our life, but in themselves they are not. These fixed points are not the devil's invention; they are the dikes with which God encircles His good creation, to keep it in His fellowship and protect it from chaos...Therefore the believer's combat is never to strive against [the Powers], but rather to battle for God's intention for them, against their corruption.

William Stringfellow would say that the powers are not evil, they are fallen and thus antagonistic toward God, creation, other powers and humankind. Our struggle with the powers is with them in their fallenness. Berkhof continues:


Paul speaks, once, of the Powers as related to the creative will of God. But we do not know them in this divinely appointed role. We know them only as bound up with the enigmatic fact of sin, whereby not only men have turned away from God, but the invisible side of the cosmos functions in diametric opposition to its divinely fixed purpose. When Paul writes that nothing can separate us from the love of Christ, not even the Powers, he presupposes that the nature of the Powers would be to do just that, to separate us from love. The Powers are no longer instruments, linkages between God's love, as revealed in Christ, and the visible world of creation. In fact, they have become gods (Galatians 4:8), behaving as though they were the ultimate ground of being, and demanding from men an appropriate worship. This is the demonic reversal which has taken place on the invisible side of creation. No longer do the Powers bind man and God together; they separate them. They stand as a roadblock between the Creator and His creation.

The Powers continue to fulfill one half of their function. They still undergird human life and society and preserve them from chaos. But by holding the world together, they hold it away from God.

A couple of observations about this. The struggle against the powers isn't for their eradication. Rather, the struggle is for their redemption, for the powers to submit to the Lordship of Jesus and regain their proper place and function in human affairs.

The battle with the powers, then, is really about idolatry. Less about the existence of the powers than with their existential, moral, political and spiritual ultimacy in human affairs. Phrased other way, the struggle with the powers is about bondage and slavery, submitting to them rather than confessing that Jesus is "Lord of all."

So how do we relate to the powers in their fallen state?

According to Berkhof the church plays a vital role in all this. The mere existence of the church is an act of defiance and resistance to the powers. Resistance occurs where there are people confessing Jesus as Lord of all in the face of the powers. Berkhof:


[T]he very presence of the church in a world ruled by the Powers is a superlatively positive and aggressive fact...All resistance and every attack against the gods of this age will be unfruitful, unless the church is resistance and attack, unless she demonstrates in her life and fellowship how men can live freed from the Powers.

To resist the powers means that the church is to exhibit in her life the rule and reign of Jesus Christ over against the "gods of this age." In her life the church rejects the powers of mammon, nationalism, injustice, prejudice, and oppression. These powers are unmasked, delegitimized and rejected in the church as she confesses Jesus as Lord of all.


Just by being simply the church, she is the instrument whereby Christ brings to crisis the rule of the Powers even far outside her borders.

Again, resistance to the powers is about idolatry, resistance is about rejecting the divine ultimacy of the powers where we live our lives under their direction and rule.

What this involves, according to Berkhof, is that we must "Christianize" the powers.

So the way you "Christianize" these powers, according to Berkhof, it to knock them off their thrones, to shrink them back to their proper size, to return to them to their proper function as servants of the greater good. Berkhof's summary of this:


From this discernment there springs forth a basically different way of dealing with creaturely reality. The Holy Spirit "shrinks" the Powers before the eyes of faith. They may have inflated themselves to omnipotent total value systems, but the believer sees them in their true proportion, as nothing more than one segment of creation, existing because of the Creator, and limited by other creatures...In faith life is seen and accepted in its smallness and modesty...

That [the Powers] are "Christianized" means they are made instrumental, made modest; one could even say "neutralized."... [T]he Powers are relativized, made modest. They no longer pretend to offer an inspiring center for all of life...[The church strives] to neutralize the Powers and de-ideologize life...

The Holy Spirits shrinks the powers before the eyes of faith.

To resist the powers means to de-ideologize life.