The Theology of Calvin and Hobbes, Part 5, Chapter 12: Calvinball 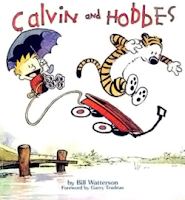 1.
In Part 5, the final part of The Theology of Calvin and Hobbes, we'll take a look at the soteriological themes of Watterson's strip. We've looked in Parts 1-4 at themes related to the human predicament. Here in Part 5 we will look at places in Calvin and Hobbes where moments of grace break into the strip. We begin with that game of all games:

In the early years of Calvin and Hobbes we often find Calvin playing baseball. This is a theme Watterson clearly inherited from Charles Schulz's Peanuts. Like Charlie Brown, Calvin is a poor athlete. Thus, in the baseball strips we find Calvin, like his predecessor Charlie Brown, failing and becoming the victim of peer rage.

In March of 1987 we see this failure & rejection theme emerge once more:

But after this particular failure in March of '89 we see Calvin and Hobbes create a new kind of game. The game is called Calvinball. Here is the debut strip for Calvinball:

"No sport is less organized than Calvinball." That is the logic behind the game. The players of Calvinball play a game that is dominated by spontaneity and new rule invention. The rule of Calvinball is that there aren't any rules. Or, rather, that the rules are fluid and flexible. Made up on the spot. This, obviously, can create some disputes between the players:

But generally, Calvinball is a joyous, communal adventure:

(Oh yes, as you might have noticed, one wears a mask in Calvinball. As readers we are never told why.)

2.
It is interesting to note the theological issues as Watterson contrasts "organized" sports versus Calvinball. Specifically,

Let me unpack these lists. In contrast to organized sports, Calvinball doesn't create winners and losers. The fun is simply the game itself. There is no outcome other than joy.

Further, competitive games reguire rules. Why? Because we are dealing with opponents in a zero-sum interaction. Rules, thus, become necessary to create order. In contrast, Calvinball is predicated upon trust and friendship. You can't play Calvinball unless the person is a friend. Enemies can't play Calvinball. You'd have too much control over the other person.

All this adds up to the final point in each list. With winners and losers and adversarial zero-sum dynamics in play it comes as no suprise that people are scapegoated in the organized games. By contrast, the world of Calvinball fosters community. There are no losers and, thus, no scapegoats among friends.

3.
I'd like to make two related theological observations about our analysis of Calvinball. One in this post and one to follow. To start, I think we see in Calvinball a comment about what was observed in the early Christian church. The word I'm thinking of is the greek term koinonia which described the intimacy, fellowship, sharing, and community of the early church. The word first appears in this description of the church in Acts 2.42-47:

They devoted themselves to the apostles' teaching and to the fellowship, to the breaking of bread and to prayer. Everyone was filled with awe, and many wonders and miraculous signs were done by the apostles. All the believers were together and had everything in common. Selling their possessions and goods, they gave to anyone as he had need. Every day they continued to meet together in the temple courts. They broke bread in their homes and ate together with glad and sincere hearts, praising God and enjoying the favor of all the people. And the Lord added to their number daily those who were being saved.

To this day, Acts 2 functions as the model and goal of all true Christian community.

It might seem to be a stretch to connect Calvinball with Acts 2, but let's go with it. The connection I'm making is this. Calvinball and the church represent a kind of "coming out of" a world of competition and zero-sum adversarialness. Calvinball and the church represent a place were a new kind of game is played. A game that is built around a different set of dynamics than the ones we find in the world. Specifically, it's a game that is built around koinonia rather than competition.

Like Calvinball, the church aims to create a game centered on trust, community, and joy.
Richard Beck at 10:31 AM
Share