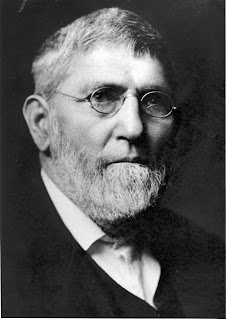 To vote or not to vote?

I go back and forth with this in my mind. In my faith tradition, the Churches of Christ, David Lipscomb (1831-1917) was the leader who articulated the view that Christians should not vote. (Incidentally, I taught for a year at Lipscomb University in Nashville. A shout out to any Bison readers!)

Why did Lipscomb object to voting? According to Lipscomb voting is a form of force and, thus, a form of violence. More, voting embroils the church in the conflict between the political parties. That is, the sight of Republican Christians fighting against Democratic Christians is a vision antithetical to the Kingdom of God.


[T]o vote or use the civil power is to use force and carnal weapons. Christians cannot use these. To do so is to do evil that good may come. This is specially forbidden to Christians. To do so is to fight God’s battles with the weapons of the evil one. To do so is to distrust God. The effective way for Christians to promote morality in a community, is, to stand aloof from the political strifes and conflicts, and maintain a pure and true faith in God, which is the only basis of true morality, and is as a leaven in society, to keep alive an active sense of right. To go into political strife is to admit the leaven of evil into the church. For the church to remain in the world and yet keep itself free from the spirit of the world, is to keep alive an active leaven of morality in the world. If that leaven loses its leaven, wherewith shall the world be leavened? or if the salt lose its savor wherewith shall the earth be salted or saved? God has told his children to use the spiritual weapons, has warned them against appealing to the sword or force to maintain his kingdom or to promote the honor of God and the good of man. When they do as he directs them, and use his appointments, he is with them to fight their battles for them and to give them the victory. When they turn from his appointments to the human kingdoms and their weapons, they turn from God, reject his help, drive him out of the conflict and fight the battles for man’s deliverance with their own strength and by their own wisdom. Human government is the sum of human wisdom and the aggregation of human strength. God’s kingdom is the consummation of Divine wisdom and in it dwells the power of God.

Incidentally, as you can surmise, Lipscomb was also a pacifist. When I discuss, from time to time, the pacifist and anarchist roots in the Churches of Christ I'm mainly pointing to Lipscomb and those influenced by him.

May the voice of David Lipscomb be recovered and increase in the Churches of Christ.

Our churches need him.


[V]oting does much more harm to the church than dancing does.

One can only assume that David Lipscomb never saw Footloose...
Richard Beck at 5:00 AM
Share