The Halo of Overalls 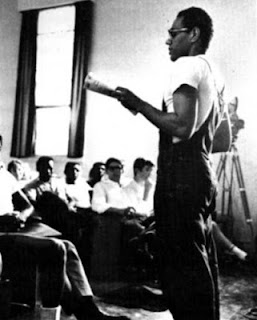 Regular readers know that I've started taking to wearing overalls. Last week at the Pepperdine lectures my friend Mark Love was kidding me about not bringing my overalls to Malibu.

Let me tell you, they were in my hand. But my suitcase was too full. And I figured that the vision of me walking around in overalls on the Pepperdine campus might have pushed people a bit too far. I'm already working the long hair and tattoo. If I added wearing overalls I'm 100% confident the campus police would have picked me up. For no crime other than looking extraordinarily bizarre.

But now that I'm back home I was in overalls all day today. Good to be back in my ugly town. I fit right in here.

Why am I wearing overalls? What's the allure?

Here's what I think is going on.

As regular readers know I'm a bit of a Civil Rights movement freak. Along with David and Jennifer Dillman I've taken ACU students on a Freedom Ride through the south. I'm met Freedom Riders James Zwerg and Bernard Lafayette. Lafayette was also a leader of the Nashville sit-in movement and a founding member of SNCC. I've sang freedom songs with Hollis Watkins (video proof here), leader of Freedom Summer in Mississippi. I've walked the Edmund Pettis Bridge in Selma and sat at the dining room table of Martin Luther King, Jr.. 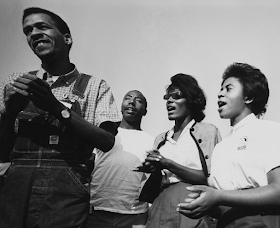 I'm a bit of a nut when it comes to this stuff. The Civil Rights activists are heroes of mine. I go to them and the history of the movement over and over again for inspiration.

And when you look at pictures of the Civil Rights activists from the '50s and '60s guess what they are wearing, particularly the activists who walked the dusty roads of Mississippi during Freedom Summer?

I think Jana is convinced that I'm wearing overalls because I want to look like a Civil Rights worker from the 1960s. I disagree, of course, because that would be ridiculous. But then again...I am a bit ridiculous.

(Last week in a store I came across one of those plaques that have an inspirational saying on them for your home of office. I usually don't like the sayings, but this one caught my attention:


Imperfection is beauty,
madness is genius.
and it's better to be absolutely ridiculous
than absolutely boring.

BTW, I believe that quote is from Marilyn Monroe. And I think it's sort of awesome (and ridiculous) that I just quoted her as a fount of wisdom. It's a strange world.) 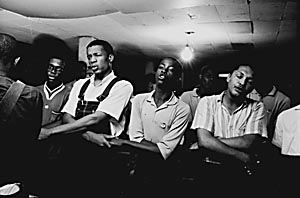 But getting back to Jana, there is a bit of truth in what she thinks. I've so immersed myself in the '50s and '60s, often idealistically, I've internalized the aesthetic from this era. I love it. The fashion. The furniture. The decor. Jana can tell you, if I walk into a retro 1950s diner I'll just about have a heart attack.

There is little doubt that all those photos of my heroes wearing overalls has affected me. Those overalls have an aura about them, a halo of heroism. Those Civil Rights workers have made me come to believe, I think unconsciously, that overalls are just really, really cool.

And so I wear them. Even if that makes me look a bit ridiculous.

Preach it, Marilyn Monroe, preach it.
Richard Beck at 5:00 AM
Share