The "War on Christmas": On Ethnocentrism and Blasphemy 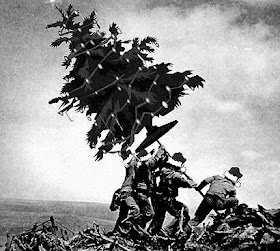 With the start of the Christmas season many American Christians are back to worrying about the so-called "War on Christmas."
As almost all of us know, the "War on Christmas" is the trend among retailers (along with other businesses and the government) to extend the seasonal greeting "Happy Holidays" rather than "Merry Christmas."

The worry about this trend, among some Christians, is that Christ--the Reason for the Season--is being removed from Christmas and the American consciousness. This is taken to be a sign of the increasing secularization of America and indicative of moral and spiritual decline.

But this is nonsense. Retailers aren't supposed to be Christian evangelists. And neither is the government in a democratic society. Retailers are in the business of selling you stuff. And if you happen to be Jewish, Muslim, Buddhist, Hindu, Wiccan or an Atheist shopping for the new XBox, the retailer, wanting to close the deal, doesn't want to insert, say, RELIGION into the transaction. The retailer wants the purchase to be as pleasant and innocuous as possible so that you keep your eye on your wallet. The retailer isn't wanting to distract you with a theological debate.

Hurts the bottom-line, you see, debating with customers about the Messiah. Hard to get people through the checkout line.

And why are retailers going with "Happy Holidays" instead of "Merry Christmas"? Because of the increasing pluralism of American society. A shift many Christians believe to be reflective of a decline of Christian influence upon American culture, the loss of "the Christian nation" the Founding Fathers had envisioned.

But America never was a "Christian nation." America was founded upon genocide and has chattel slavery enshrined in the Constitution. If anything, that makes our founding document satanic. Slaves built the White House and the US Capital for goodness sake.

What is being "lost" in our nation isn't Christianity but white hegemony. The white majority of America is declining. America is becoming more diverse and pluralistic. And retailers, well attuned to the demographic shifts in their customer base--it is their lifeblood after all--shift to reflect the times. "Happy Holidays" is what you say when a religiously and ethnically diverse population is standing in your checkout line. It's simply good business sense.

(And incidentally, why wouldn't free-market advocates, many of whom are complaining most vociferously about the "War on Christmas," want to keep the hell out of the marketplace? If a business wants to say "Happy Holidays" leave them alone, right?)

As defined by Donald Kinder and Cindy Kam in their book Us Against Them: Ethnocentric Foundations of American Opinion...


...ethnocentrism is an attitude that divides the world into two opposing camps. From an ethnocentric point of view, groups are either "friend" or they are "foe." Ethnocentrism is a general outlook on social difference; it is prejudice broadly conceived.

We define ethnocentrism to be a way of thinking that partitions the world into in-groups and out-groups--into us and them.

It's no surprise that the "War on Christmas" is seen as a "war." It's a war based upon social, cultural and ethnic difference. And there are two sides to this battle, there are friends and foes. The in-group here is white neo-evangelical Christians. The out-group are those ethnic and cultural Others.

Now, given that I'm writing this as a white Christian male, let me step back and explain how I, theologically, see this issue.

I'm not diagnosing the "War on Christmas" panic as ethnocentric as an exercise in white, liberal guilt. I do see ethnocentrism as the root of the problem and I think we should be tolerant in a pluralistic society. I think "Happy Holidays" is a way to be more hospitable and neighborly in a diverse culture. But tolerance isn't the main reason I'm okay with the shift to "Happy Holidays."

Again, the shift to "Happy Holidays" has mainly been seen in the retail world, as a way to not offend buying customers. Which means, for me at least, I don't really care what you say to me when I buy an Xbox. In fact, theologically speaking, "Happy Holidays" is a lot better than "Merry Christmas."

Well, if you tack "Merry Christmas" onto my Xbox I think that might be blasphemy.

I'm pretty sure it is blasphemy.

In short, while I'm very happy to have a more tolerant and liberalized shopping experience during the holiday season (out of simple civic respect I don't want my Muslim or Jewish neighbours to be greeted with "Merry Christmas"), my deeper concern is how the "War on Christmas" panic is inherently blasphemous and idolatrous.

Consequently, contrary to what many Christians appear to believe, I think Christians should encourage stripping "Merry Christmas" from marketplace and nation.

If you want to reclaim "The Reason for the Season" tell the nation and market to STOP saying "Merry Christmas."

Because here's the news flash: The real War on Christmas is saying "Merry Christmas" in America.

Basically, let Babylon--in marketplace and nation--greet you with "Happy Holidays." Let "Merry Christmas" be for the church. That helps clarify things. As Stanley Hauerwas provocatively said, the first task of the church is to make the world the world.