How The Church Summons Demons 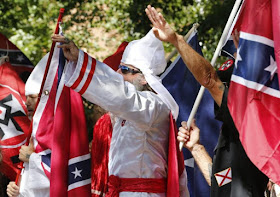 How did the German church allow Adolf Hitler to come to power? How did Christians come to summon those demons?

The German intelligentsia knew Hitler was crazy and racist. Mein Kampf told you that. So why did the German church go along with Hitler?

The German church approached Hitler pragmatically. Hitler could be used for good purposes. Yes, the man himself was completely antithetical to Jesus Christ, but the agenda and policies he stood for, these were good things.

Separate the insanity and immorality of the man from the good he would do for the country. 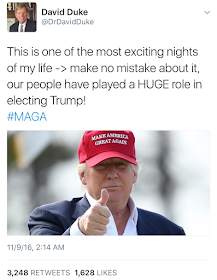 You could disagree--vehemently, as a Christian--with the racist motives behind Hitler's "Germany first" agenda, but still agree--wholeheartedly--with his Germany First policies. Did that support, then, make you, yourself, a racist? Of course not. There were very good pragmatic reasons for supporting Hitler. Hitler was crazy and racist, but Hitler's policies were good for Germany.

Who cares if Hitler had racist views, so long he made Germany great again?

And so, the German church summoned the demons.

How did American Christians come to summon the demons to our shores, emboldening a new generation of Nazis to carry torches through the night chanting "blood and soil"?

For the same reasons the German Christians did. Trump was a pragmatic choice. Admittedly, Trump was a little crazy. And true, he was no model of morality and virtue. And yes, Trump flirted with and his campaign energized white nationalists and white supremacists.

But all that could be bracketed because many Christians found the policies Trump espoused to have merit. A conservative Supreme Court justice. A border wall. Tighter immigration standards. Vigorous enforcement of the immigration laws already on the books. An "American first" approach to trade.

These polices were not inherently racist or xenophobic. Though, of course, racists and xenophobes would wholeheartedly agree with such policies. But that was just a sad, unfortunate coincidence. Just like how most of the German Christians who supported Hitler were not Nazis.

And so it was that 81% of evangelicals voted for Trump. Evangelicals and many other Christians viewed Trump's mental instability and the enthusiasm white nationalists displayed for his campaign the same way the German church viewed Hitler.

Trump might not be a good person, even a bit crazy, but he would make America great again.

And so it was, that the church, once again, summoned the demons. 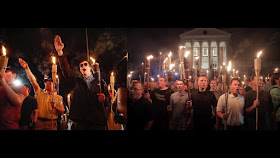