That All Shall Be Saved 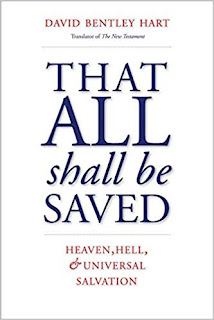 Many of my long time readers found me in the early years of this blog because of my writings defending universal reconciliation. Newer readers might be unaware of these posts since I haven't written about this topic a lot lately. But nothing has changed, I still believe that God will, in the end, reconcile all things to Himself.

In the early years of this blog, my colleagues in theology and Biblical studies thought I was bonkers when I shared my views. Rob Bell did come out soon after with Love Wins, but that wasn't vindication. If anything, it made things worse. Rob Bell and Love Wins represented everything that goes wrong with progressive, liberal theology. It was assumed that I believed in universal reconciliation because I was "progressive." It didn't matter that some pretty less-than-liberal heavy hitters flirted with or endorsed universal reconciliation, from the church fathers to Karl Barth. There's more to this view than is typically assumed. You just can't dismiss it with a wave as a capitulation to modernity, liberalism, and humanism.

All that to say, the Orthodox theologian David Bentley Hart has just published That All Shall Be Saved: Heaven, Hell, and Universal Salvation. I seriously doubt that my colleagues can accuse David Bentley Hart of being a squishy, progressive, "love wins" theologian. As Hart makes clear in the book, universal reconciliation has nothing do with with liberalism. The point is, rather, for me at least, the simple yet courageous recognition that Christianity is incoherent without universal salvation.

If you don't buy that and don't want to read the book, you can dip into a bit of Hart's argument in his article God, Creation, and Evil: The Moral Meaning of creatio ex nihilo (an essay reworked as a chapter in That All Shall Be Saved). And if you don't want to read that article, here's the gist of it: If God created the vast majority of humanity knowing that He would torture them for all eternity, well, then he'd be a monster.

A God that creates ex nihilo, only to end up torturing the majority of His creation for eternity, strains the theological definitions of omnipotence and omnibenevolence past the point of breaking. So I'll say it again: Christianity is incoherent without universal salvation.

The issues here are real, but it takes some theological courage to admit and face those issues directly, honestly and squarely rather than dismiss them as a modern product of liberalism and humanism.
Richard Beck at 5:00 AM
Share