The Gospel According to The Lord of the Rings: Week 54, Food for the Journey 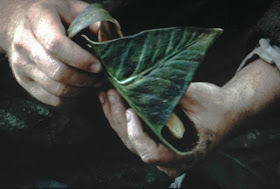 Though Sam realizes that he and Frodo do not have enough food to make a return trip out of Mordor, they do have enough food for the journey to Mount Doom. And that food has great theological significance. The manna that sustains Frodo and Sam is the waybread of Lothlórien.

I say manna because, as mentioned before in this series, Tolkien uses the Elves to enchant Middle Earth. The Elves, along with the Maiar (like Gandalf), are the "angels" and "archangels" of the saga. So it's not surprising that the waybread (lembas) of Lothlórien would provide Frodo and Sam with supernatural sustenance:

The lembas had a virtue without which they would long ago have lain down to die. It did not satisfy desire, and at times Sam’s mind was filled with the memories of food, and the longing for simple bread and meats. And yet, this way bread of the Elves had potency that increased as travelers relied upon it alone and did not mingle it with other foods. It fed the will, and it gave strength to endure, and to master sinew and limb beyond the measure of mortal kind.

This is Eucharistic talk. Tolkien's Catholicism is on full display here. The Eucharist is that food that doesn't feed desire (a small wafer isn't much of a meal), but it is the bread that feeds the will, the meal that gives us strength to endure "beyond the measure of mortal kind."

The sacramental theology on display here is rich, deep, and thick. The Eucharist is magical. Supernatural. It is manna, the bread of angels. The Eucharist is not a dead prop or memory aid, it is an enchanted meal that gives us supernatural strength for the hard and difficult journey. And it is a meal that increases in potency the more we come to rely upon it.

This reminds me of Flannery O'Connors' quip about the Eucharist at a fancy dinner with New York writers, critics, and intellectuals. During the gathering, the topic of the Eucharist came up. It was assumed that Flannery, being the only Catholic in attendance, would defend the sacrament. In a letter to her friend Flannery describes the exchange she had with Mary McCarthy, the writer and essayist:

"Well, toward morning the conversation turned on the Eucharist, which I, being the Catholic, was obviously supposed to defend. [Mary McCarthy] said when she was a child and received the Host, she thought of it as the Holy Ghost, He being the 'most portable' person of the Trinity; now she thought of it as a symbol and implied that it was a pretty good one. I then said, in a very shaky voice, 'Well, if it's a symbol, to hell with it.' That was all the defense I was capable of but I realize now that this is all I will ever be able to say about it, outside of a story, except that it is the center of existence for me; all the rest of life is expendable."