"He Devises Means So That the Banished One Will Not Remain an Outcast": Salvation and Divine Resourcefulness 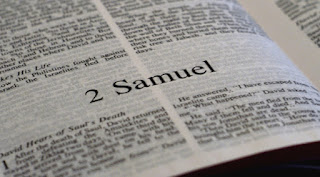 Pitted against that view is an appeal to divine resourcefulness. That, plus an eternity with which to work. God doesn't have to coerce a soul. God is resourceful, and has all of eternity to educate and heal recalcitrant souls.

An Old Testament text that points to God's resourcefulness comes from the life of David in 2 Samuel 14.

Absalom had been banished from Israel from taking revenge upon his brother Amnon. You'll recall that Amnon raped Tamar, Absalom's sister. Hating Amnon for violating his sister, Absalom eventually murders his brother and then flees Israel to escape punishment.

During Absalom's banishment, Joab sends a wise woman to David. She tells a story about having two sons who quarrel, leading one to kill the other. She asks David, as an act of grace, to protect the son who murdered his brother. David assures her that he will.

And then, much like Nathan does in the case of Bathsheba, the wise woman turns the story back on David, saying that he needs to extend the same grace to the banished Absalom for killing his brother. Making her point, the wise woman says to David:

For in giving this decision the king convicts himself, inasmuch as the king does not bring his banished one home again.

And then the wise woman connects this grace to how God treats the banished. She says,

We must all die; we are like water spilled on the ground, which cannot be gathered up again. But God will not take away life, and he devises means so that the banished one will not remain an outcast.

There it is, that is the divine resourcefulness:

God "devises means so that the banished one will not remain an outcast."