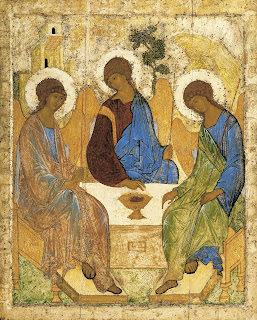 Having set out her criticisms of social trinitarianism in "Perichoresis and Projection: Problems with Social Doctrines of the Trinity," or at least how we rather predictably extract our preferred politics from that doctrine, what does Karen Kilby share as an alternative approach to the Trinity?

Kilby shares what she describes as an "apophatic trinitarianism." Recall, apophatic theology concerns itself with the mystery of God, the wholly Otherness of God, how any human description of God not only falls short of God, but actually distorts our understanding of God. Apophatic theology places us in the cloud of unknowing. As Thomas Aquinas taught us, we don't really know what we are talking about when we are talking about God. Our only positive knowledge of God is what God is not.

And of all the apophatic mysteries of God surely the Trinity has to be at the top of the list. We just don't know what or how the Trinity exists. It's a mystery that confounds all human attempts at comprehension. That is the heart of Kilby's concerns about political proposals extracted from social visions of the Trinity. In describing the Trinity with such human precision, so precise we get clear policy proposals from the doctrine, we've been tricked into a literalness and conceptual clarity that shouldn't exist when speaking about the mystery of God.

Consider the assessment of John of Damascus, one of the early church fathers to provide us with one of the first descriptions of the Trinity as perichoresis:

The abiding and resting of the Persons in one another is not in such a manner that they coalesce or become confused, but, rather, so that they adhere to one another, for they are without interval between them and inseparable and their mutual indwelling [en allais perichoresin] is without confusion. For the Son is in the Father and the Spirit, and the Spirit is in the Father and the Son, and Father is in the Son and the Spirit, and there is no merging or blending or confusion. And there is one surge and one movement of the three Persons. It is impossible for this to be found in any created nature.

Note that last line. After describing the trinitarian relations as perichoresis, John ends with the apophatic mystery: "It is impossible for this to be found in any created nature." Whatever perichoresis might be, we've never laid eyes on it. There's no word picture we could paint that even gets close to describing this mystery.
Anyway, that is Kilby's point. Her argument is that the doctrine of the Trinity isn't really giving us a vision of what God is like. The Trinity, she argues, is more of a grammatical rule about how to speak properly of God. So we shouldn't expect "insight" from these grammatical rules, a window into the life of God. Of course, Kilby admits, we still want to penetrate that mystery, to get a peek behind the curtain if you will. But Kilby is quick caution that such desires, while well intended, won't yield clear and easy answers or insights. The mystery abides. Kilby summing all this up in her essay:

If not the social doctrine, what then? The beginnings of an alternative are present already in what was said above. I suggested that problems arise when one looks for a particular insight into God of which the doctrine of the Trinity is the bearer. My own proposal, then, is not that one should move from the social back to, say, a psychological approach to the Trinity--this would simply be to look for a different insight--but rather that one should renounce the very idea that the point of the doctrine is to give insight into God.

The doctrine of the Trinity, I want to suggest, does not need to be seen as a descriptive, first order teaching--there is no need to assume that its main function must be to provide a picture of the divine, a deep understanding of the way God really is. It can instead be taken as grammatical, as a second order proposition, a rule, or perhaps a set of rules, for how to read the Biblical stories, how to speak about some of the characters we come across in these stories, how to think and talk about the experience of prayer, how to deploy the "vocabulary" of Christianity in an appropriate way. The doctrine on this account can still be seen as vitally important, but important as a kind of structuring principle of Christianity rather than as its central focus: if the doctrine is fundamental to Christianity, this is not because it gives a picture of what God is like in se from which all else emanates, but rather because it specifies how various aspects of the Christian faith hang together.

But surely, one might respond, if I am told that God must be spoken of as three persons and one substance, I will inevitably try to make sense of this. If God must be spoken of in this way, what does that mean about how God really is? The question, perhaps, is inevitable, and the history of theology is littered with (conflicting) attempts to answer it. What I am suggesting, however, is that it is nevertheless a secondary question--affirming a doctrine of the Trinity does not depend on being able to answer it, nor does establishing the relevance of the doctrine depend on finding the "right" answer to it.

You might find that conclusion a bit unsatisfying. There is something in us that feels certain that the Trinity must be relevant and practical. The Trinity just has to have moral and political implications. It must, shouldn't it, if our lives and social relationships are to participate and share in the life of God? What are our lives supposed to look like if not the love that exists between Father, Son and Holy Spirit?
We'll turn to that question in the next post. But what, you might be asking today, do I think of Kilby's apophatic approach to the Trinity?
I think she makes a good point. I think we get a bit too literal and specific when we speak about God, the Trinity in particular. So specific we too easily draw a straight line from the Trinity to our preferred politics. That's a very important caution.
As we'll talk about in the next post, I do think the Trinity carries moral and even political implications, but Kilby's apophatic trinitarianism helps chasten and humble all too-easy, too-cozy, too-obvious, too self-serving political and social readings of the Trinity. Kilby is a prophetic reminder that idolatry remains a constant temptation whenever we speak about God, especially when we invoke God for political purposes.
Richard Beck at 5:00 AM
Share