Justification and Judgment Day: Part 5, "He Will Render Each According to Their Works" 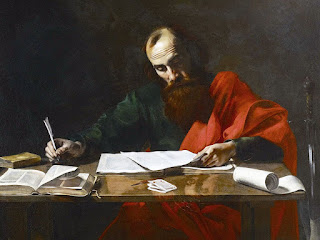 So, what exactly is the thesis statement of this different way of thinking about the relationship between justification and judgment? Gabriele Boccaccini presents it concisely this way:

Justification by faith was a way to restore (not annul) human responsibility and uphold (not abolish) God's covenants, including the Mosaic torah.

Beyond a forensic focus upon the forgiveness of sins, the other issue here involves human capacity. As Paul describes it in Romans, the Torah is "holy, just and good." So the problem isn't with the Law. The problem is human incapacity. The problem, as Paul declares in Romans, is that both Jews and Gentiles are "under the power of sin." Because of this slavery to Sin the Jews are unable to fulfill the Torah and the Gentiles are unable to fulfill the natural law written on their hearts. Justification, then, involves more than amnesty for past sins. Justification restores a human capacity to obey the law of God. Think about Ezekiel's prophecy that God will replace Israel's heart of stone with a tender, responsive heart. As Boccaccini says, justification by faith restores human responsibility before God because, following Ezekiel, it restores response-ability. As described by Paul, this response-ability is accomplished through our cooperation with the Holy Spirit. We work out our own salvation with fear and trembling because it is God at work within us (Philippians 2.12-13).

Stepping back, if you've followed the "atonement wars" over the last few decades you might appreciate how this view nicely combines forensic and Christus Victor themes of atonement. There is forgiveness here along with emancipatory power. The Day of Atonement and Passover. Mercy and freedom. Pardon and liberation. Grace and power. It's both/and, not either/or. Sinners before God have a twofold problem: Guilt and incapacity. And both are addressed in the act of faith: amnesty for past sins and empowerment through the gift of the Spirit. Our slate has been wiped clean and we've been empowered, through the Holy Spirit, to live a holy and rehabilitated life. Romans 5.9 describes it this way:

Since, therefore, we are now justified by his blood, much more shall we be saved by him from the wrath of God.

Justification sets us on our feet, gifting us the capacities and preconditions to face the coming judgment of God, after which we experience salvation. Today we are justified and will be saved (note the future tense) from the coming wrath of God. Justification is now and salvation is something we strive for knowing that, as Paul also says in Romans, we can stand at the judgment because God is able to make us stand (Rom. 14.4).

Finally, then, brothers and sisters, we ask and urge you in the Lord Jesus, that as you received from us how you ought to walk and to please God, just as you are doing, that you do so more and more. For you know what instructions we gave you through the Lord Jesus. For this is the will of God, your sanctification: that you abstain from sexual immorality; that each one of you know how to control his own body in holiness and honor, not in the passion of lust like the Gentiles who do not know God; that no one transgress and wrong his brother in this matter, because the Lord is an avenger in all these things, as we told you beforehand and solemnly warned you. (1 Thess. 4.1-6)
He will render to each one according to his works: to those who by patience in well-doing seek for glory and honor and immortality, he will give eternal life; but for those who are self-seeking and do not obey the truth, but obey unrighteousness, there will be wrath and fury. There will be tribulation and distress for every human being who does evil, the Jew first and also the Greek, but glory and honor and peace for everyone who does good, the Jew first and also the Greek. For God shows no partiality.

For all who have sinned without the law will also perish without the law, and all who have sinned under the law will be judged by the law. For it is not the hearers of the law who are righteous before God, but the doers of the law who will be justified. (Rom. 2.6-13)
For no one can lay a foundation other than that which is laid, which is Jesus Christ. Now if anyone builds on the foundation with gold, silver, precious stones, wood, hay, straw— each one's work will become manifest, for the Day will disclose it, because it will be revealed by fire, and the fire will test what sort of work each one has done. If the work that anyone has built on the foundation survives, he will receive a reward. If anyone's work is burned up, he will suffer loss, though he himself will be saved, but only as through fire. (1 Cor. 3.11-15)

These are texts that cut across the notion of "imputed righteousness," as they clearly seem to indicate that our own deeds will be exposed and judged on the Day of the Lord, the coming wrath. And it's important to note that these texts were addressed to those who had been justified by faith. The passage from 1 Corinthians even raises the intriguing possibility that one can be saved yet still experience loss if their deeds have been found wanting and worthless. I've never heard any church discuss this as an eschatological possibility, saved-but-suffering-loss, which makes one wonder if we've ever correctly understood Paul concerning the relationship between justification and judgment.
And yet, if the justified are judged by their deeds at the judgment, doesn't that throw up all those Lutheran worries regarding the status of our own salvation?
Well, it's hard to see how we can get to a 100% worry-free situation with texts like "work out your own salvation with fear and trembling" hanging around, along with all the other warnings about falling away. Warnings imply some worry. But a bit of worry might not be such a bad thing. Frankly, given the bad behavior of so many Christians, I think we need some more worry in the pews, a few more sermons on Sunday proclaiming "the fire will test what sort of work each of us has done."
However, as noted early in this series, worry can be a pastoral problem. Especially if you think you're doing this all alone. But this is why what we said at the start of this post is so important: You're not alone. We will be able to stand because God will make us stand. We'll conclude this series in the next post to consider these calls to confidence.
Richard Beck at May 03, 2022
Share