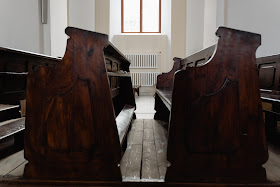 Another way the church practices its way into functional atheism, if unintentionally, is in how it reads the Bible.

As I recount in Reviving Old Scratch, Thomas Jefferson once took scissors and glue to the New Testament gospels to create his own personal version of Scripture. As a leading figure of the Enlightenment, Jefferson found the supernatural and miraculous aspects of the Bible unacceptable for the "age of reason." What was important about Jesus was his moral teachings, not his miracles.

And so, Jefferson picked up a copy of the gospels and cut out all the miracles. Literally. He then pasted his disenchanted version of the Bible back together to create what is now called "The Jefferson Bible."

While Jefferson's actions seem extreme, we're all tempted to play Thomas Jefferson with the Bible. Of course, the life and teachings of Jesus have moral and political content and implications. As a summary of Jesus' moral teachings, The Jefferson Bible is perfectly legitimate. But if we only read Jesus through a moralistic lens we tip toward functional atheism. Christianity "just is" a moral code. A moral code that could be followed as a Christian, humanist, or atheist.

Pastors often play Thomas Jefferson in their sermons. Again, this tends to be unintentional, but it happens when pastors have a habit of tipping their preaching toward the moralistic. For example, I recently heard a pastor preach about the miracle of Jesus feeding the five thousand. The pastor shared that there have been, historically, two ways to think about this miracle. The first way is the enchanted, woo woo take. Jesus miraculously multiplied the loaves and the fishes. The second take is disenchanted, moralistic and functionally atheistic: Seeing the generosity of the boy who donated his loaves and fishes, the multitude shared what they had with each other. The "miracle" was sharing and human generosity. The "miracle" was morality.

Notice, once again, as a running theme in this series, how the "miracle of sharing" sermon about the feeding of the five thousand disenchants the story, in good Thomas Jefferson fashion, by highlighting human over divine agency. Again, this has been a familiar theme in this series, how churches, unintentionally, keep spotlighting our actions over God's action. Certain habits of reading Scripture nurture this tendency, a tendency among pastors that forms their church into Thomas Jefferson.