Among the Post-Protestants: Part 1, A Mysticism of the Social Order 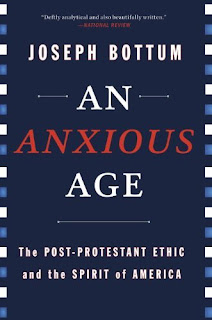 I've been reading Joseph Bottum's book An Anxious Age and wanted to devote few posts reflecting on the thesis in the book.

To start, Bottum observes how America's political, managerial, journalistic, academic, and creative classes--the culture "makers--are characterized by a moral and spiritual anxiety. This anxiety pushes against the notion that we've entered a "post-Christian" moment. Rather than being lessened or marginalized, it seems that life, especially politics, is becoming increasingly moralized, characterized by a spiritual hunger, even a desire for moral heroism, a battle between Good and Evil.

What is the source of this moral and spiritual anxiety, especially as we see church attendance decline?

Bottum's argument is that American isn't post-Christian, it's post-Protestant. Specifically, the spiritual glue that once held the nation together was mainline Protestantism, the generations of Lutherans, Presbyterians, Disciples of Christ, Congregationalists, Northern Baptists, Episcopalians, and Methodists who shaped the moral sensibilities and lifeways of the middle, upper and political classes of American life.

However, starting the 1960s the mainline denominations have experienced a precipitous decline. During the 60s, almost 50 percent of Americans sat in the pews of the mainline churches. Today, less than 10 percent do. That's a huge and swift cultural shift, and Bottum's argument is that it explains much of our current cultural moment, especially the moral and spiritual anxieties the characterize modern life, especially the political left to center-left. As Bottum writes, "The lost Mainline is who we are. It's what defines us."

Specifically, where did the children of the mainline congregations go? What did they become?

Bottum argues that they didn't become post-Christian. The children of mainline Christianity became post-Protestant, carrying forward into the public and political arena the social gospel they inherited from their parents, still crackling with moral urgency and passion, yet stripping off and leaving behind the metaphysical dogmas of Christianity. As Bottum describes it, the "result of [post-Protestantism] is a nearly complete transfer of Christian fear and Christian assurance into a sensibility of the need for [social] reform, a mysticism of the social order--the anxiety about salvation resolved by ecstatic transport into the feeling of social solidarity."

If a "mysticism of the social order" sounds a lot like our contemporary spiritual thirst for "social justice" as the arena of moral heroism and our quest for salvation, well, that's exactly Bottum's point. Our world remains, in its moral and spiritual sensibilities, deeply Christian. Just without Christ. Social justice is a manifestation of being post-Protestant, a spiritual urge for social reform--"ecstatic transport into the feeling of social solidarity"--that now crackles with the moral and spirituality anxieties that once characterized Christianity.