Among the Post-Protestants: Part 2, The Social Gospel 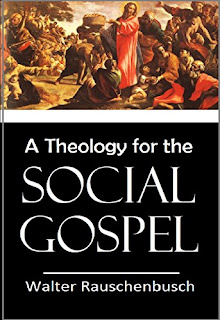 So why did the mainline churches decline, and how was it that their children retained the mainline concern for social consciousness and social justice, just without the religious key?

According to Joseph Bottum, it was the social gospel, preached by influential theologians like Walter Rauschenbusch in books like A Theology of the Social Gospel.

For example, in A Theology of the Social Gospel, published in 1918, Rauschenbusch argued that six forces conspired to kill Jesus in the gospels. Rauschenbusch listing out the six "social sins" that led to the crucifixion of Jesus:

Religious bigotry, the combination of graft and political power, the corruption of justice, the mob spirit and mob action, militarism, and class contempt – every student of history will recognize that these sum up constitutional forces in the Kingdom of Evil.

All that should sound eerily familiar. Very contemporary.

As Bottum points out, Rauschenbusch's social gospel is almost, point for point, the concerns of progressives and liberals today. Prejudice. Political corruption. The ignorant "deplorables." Militarism. Economic inequity. All this goes to make Bottum's point. Liberals and progressives might not be going to church on Sunday, but we aren't post-Christian. We are post-Protestant. We are the children of the social gospel. We are the heirs of the moral and spiritual vision of mainline Christianity who have, in the words of Bottum, "stripped out the Christianity along the way."