The Gospel According to The Lord of the Rings: Week 55, The Author of the Story 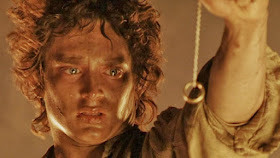 The "deep narrative" carries Frodo and Sam all the way to the cracks of Mount Doom, toward the denouement of the story. The final plot twist.

For example, as Fleming Rutledge points out, many passive sentence constructions are used to describe Sam's actions in getting Frodo to and up Mount Doom. For example, when Sam starts to carry Frodo on his back, we read that "some gift of final strength was given him." Later, when Sam cannot carry Frodo up the mountainside any longer, he sets Frodo down and lays down beside him. And this happens: "Suddenly a sense of urgency which he did not understand came to Sam. It was almost as if he had been called: 'Now, now, or it will be too late!' He braced himself and got up."

Even here, deep in the bowels of hell, a providential power is still present and at work.

And that providential power is revealed in the narrative shock we experience when Frodo finally--finally!--reaches the cusp of the abyss. At long last, and with an effort almost superhuman in its expenditure, Frodo finally comes to the conclusion of his quest.

And there, arriving at the climatic moment, Frodo fails.

This is a severe shock because we are denied, here in the final moment, a heroic action and ending. What we get, at the very end, after long trial and tribulation, is a failure.

As Rutledge discusses, many readers of the story angrily wrote Tolkien, complaining bitterly about Frodo's failure. It doesn't seem to be a very good ending for a story to have your hero fail in the end.

And yet here, in Frodo's failure, the deep narrative of the story comes into full view. No human can defeat evil. We are too powerless, too weak. And while that's not a very heroic realization, it is, nevertheless, the truth. A truth that points to a salvation that has to come to us from outside ourselves, from that providential power that has been at work from the very beginning.

In a response to one of his angry readers, Tolkien shared, "Frodo deserved all honour because he spent every drop of his power of will and body, and that was just sufficient to bring him to the destined point, and no further...The Other Power then took over, the Writer of the Story (by which I don't mean myself)."