Among the Post-Protestants: Part 6, Culture Wars Have Been Denominational Wars 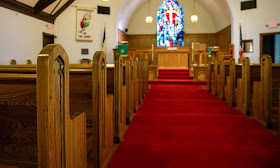 Before turning to my interests in this series, a post to bring the Evangelicals into the story.

Summarizing, the children of the mainline, in their embrace of a social gospel without the gospel, became the post-Protestants, now broadly associated with the left to center-left of the nation. On the political right, center to far, are the Evangelicals.

Basically, one way to explain the political divide that has been at the heart of America is as a Protestant debate about salvation.

We tend to think that the current political divide in the nation is between irreligious progressives and religious evangelicals, as a war between secularism and faith. But with Bottum's work in hand we can see that this secularism vs faith framing is misleading. The moral vision of secular progressivism is post-Protestant, the social gospel without the gospel. We're still dealing with the mainline/evangelical debate.

Ponder one of the main issue that sits at the heart of our cultural wars, personal responsibility versus systems. On the one side is the evangelical vision that sin is fundamentally about individual responsibility and guilt, issues of personal values and morals. And on the other side is the post-Protestant (read: mainline) vision of the social gospel, that sin is fundamentally about unjust and oppressive social systems.

(Let me pause to say a word about the paradox of evangelical support for Donald J. Trump. To the bewilderment of many on the left, evangelicals support Trump, an obviously immoral person. But the answer here is straightforward: Trump does not espouse or embody evangelical values, he defends them. Trump fights for evangelicals, gloves off. He fights for them in a way no GOP leader ever has, giving him the stature of "savior" among evangelicals. That said, after the Jericho March and the events of Jan. 6 I really can't say what evangelical "values" are anymore. I think Trump and QAnon effectively destroyed evangelicalism. Which means that a lot of this post is more of a retrospective postmortem about what American evangelicalism used to be prior to Trump.)

Anyway, the point is that America remained a very Protestant nation even as it became more post-Christian. Our culture wars since the 60s have not really between between post-Christian progressives and fundamentalist evangelicals. Since the 60s, our culture wars have been a continuation of the longstanding denominational war between mainline Christianity and evangelicalism, rival Protestants visions of sin and salvation, redeeming souls versus redeeming social structures.

In short, our political debates in America often have been theological debates. We are a nation that has been debating soteriology--sin versus the social gospel. A denominational war haunts post-Christian America.