Justification and Judgment Day: Epilogue, The Obligations of Grace 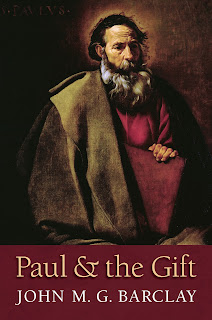 Before ending this series, I wanted to add an epilogue connecting the work of John Barclay with the argument we've been exploring in this series.
Specifically, how is it that justification can be based upon grace but judgment become based upon works? I believe John Barclay's very influential work on grace in his book Paul and the Gift can be illuminating on this point.

In his book Barclay argues that grace has been "perfected" in various ways. If God is the perfect Giver then God gives perfect gifts. But what does a perfect gift look like?

Barclay suggests that, throughout Christian history, grace has been perfected in six different ways:


1. Superabundance
Grace is "perfected" if it is lavish and extravagant.

2. Singularity
Grace is "perfected" if it flows out of a spirit of benevolence and goodness.

3. Priority
Grace is "perfected" if it is unprompted, free, spontaneous and initiated solely by choice of the giver.

4. Incongruity
Grace is "perfected" if it ignores the worth or merit of the recipient.

5. Efficacy
Grace is "perfected" if it accomplishes what it intends to do.

6. Non-Circularity
Grace is "perfected" if it escapes repayment and reciprocity, if it cannot be paid back or returned.

Barclay's argument is that Paul's message of grace was primarily about the incongruity of grace. Grace is grace because it is a gift given to the unworthy. That seems banal to us, but Barclay points out that this was, in Paul's time and place, a radical notion. In the Roman first century context perfect gifts were gifts given to worthy recipients. Paul's gospel blew that idea out of the water and forever changed how we think of grace. Today it's a truism that grace is given to people who don't deserve it. That's what makes grace grace. This was the revolution at the heart of Paul's gospel. Grace is what obliterated the honor/shame distinction between Jew and Gentile.

But for this series I'd like us to pay attention to Barclay's work regarding the perfection of non-circularity.

Non-circularity is the idea that grace cannot be repaid, that grace escapes the obligations of reciprocity. Grace is grace because we cannot pay it back. Because if we could pay it back, it would no longer be grace, no longer be a gift. Or so we think.

Like the perfection of incongruity, this perfection of grace was foreign to Paul's world. Gifts were given in the ancient world precisely to create bonds of reciprocity and obligation. These bonds of obligation were what made the ancient patronage and gift economies work. True, elaborate cultural rituals were in place to obscure this fact--it would be crude and improper to try to repay the gift immediately and directly--but bonds of obligation were created by ancient patronage.

So our modern notion that grace escapes repayment is a break with the ancient understanding. How did we wind up with this foreign idea?

As Barclay recaps the story, the perfection of non-circularity emerged from the fires of theological debate in church history. Augustine vs. Pelagius. Luther vs. Erasmus. Calvin vs. Arminius.

At the heart of these debates was the amount of human participation required in salvation. As the debates were waged, the Augustinian, Lutheran and Calvinistic camps perfected the non-circularity of grace. Grace was 100% the work and initiative of God. Humans cannot repay grace. They shouldn't even try. If we tried to repay grace we'd destroy it. We'd be trying to earn grace, trapping ourselves in a works-based righteousness. And so the assumption took hold. Grace escapes repayment.

And yet, if you read Paul, that conclusion seems off. And that's the point that Barclay makes. Paul didn't perfect non-circularity. Theologians did, and we do, but Paul didn't. According to Barclay, and this goes to the point of this series on justification and judgment, Paul most definitely felt that grace should be repaid, that grace created bonds of obligation. As Barclay writes, "The incongruity of grace does not imply, for Paul, ... its non-circularity (since the gift carries expectations for obedience)."


[T]he notion of a gift "with no strings attached" was practically unimaginable in antiquity...None of Paul's hearers would have been surprised to learn that as recipients of the divine gift they were placed under obligation to God.

For Paul, grace creates a covenantal bond, and covenantal bonds were most definitely circular and reciprocal. Think about how Paul, after describing the gift of grace in the first part of his letters, turns to the big THEREFORE in the second half, the part where Paul shifts to behavioral imperatives. Grace obligates you.

In short, Barclay makes the point that grace was unconditioned but not unconditional:

Paul thus combines two features that appear paradoxical only to us. On the one hand, he perfects the incongruity of the gift, its donation to those unfitting to be its recipients; on the other, he presumes its strongly obligating character...Here it is crucial to remind ourselves that a perfection of gift in one dimension does not entail a perfection in every other: Paul perfects the incongruity of the gift (given to the unworthy) but he does not perfect its non-circularity (expecting nothing in return). The divine gift in Christ was unconditioned (based on no prior conditions) but it is not unconditional (carrying no subsequent demands).

Grace is unconditioned, but not unconditional. I hope you can see how this insight illuminates the contrast between justification and judgment, how we can strike a balance between grace and works.
Specifically, because of the incongruity of grace, that grace ignores the worth of the recipient, we get the idea from Paul that grace ignores our sin and our attempts at self-justification. Grace obliterates any distinctions of merit, and we can see how this obliteration did work for Paul in bringing both Jews and Gentiles to a shared table. We tend to forget how, for Paul, grace was primarily a tool for creating table-fellowship between Jews and Gentiles. This status-leveling in light of grace allowed Paul to form communities where Jews and Gentiles welcomed each other as brothers and sisters in Christ. As Paul sums it up at the end of Romans, Jews and Gentiles were to "welcome each other as Christ welcomed you."
Justification, then, is based upon grace, and due to its incongruity, grace really does ignore the merit and worth of the recipient. And yet, according to Barclay, grace is not unconditional. Once accepted as a gift you didn't deserve or merit, grace creates bonds of obligation. Grace perfects incongruity but leaves obligation intact. Grace requires repayment.
This understanding of grace--incongruous but obligating--fits perfectly with the argument of this series. Justification does involve incongruity, a gift poured on undeserving sinners. But since this gift creates obligations, future judgment will assess how well we've fulfilled these duties and obligations. As Paul says clearly in Romans:

There is now no condemnation for those who are in Christ Jesus.

Do you see it? There is NOW no condemnation for those who are in Christ Jesus. THEREFORE we HAVE AN OBLIGATION. And if you fail in that obligation, if you continue to live according to the flesh, you will die. But if, by the Spirit, you put to death the misdeeds of the body, you will live.
The gift of grace is incongruous but obligating, and we will be judged accordingly.
Richard Beck at May 10, 2022
Share