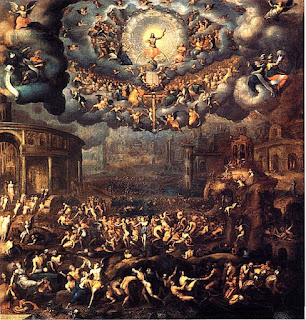 Most Christians, I'm assuming, won't be asking the question being asked in this post. Most Christians are fine with Judgment Day producing two different eschatological outcomes, eternal salvation or eternal damnation. And if that's your view, we've already covered the novelties of this series, the notion that everyone on Judgment Day, even the justified, will be judged according to their works.

But a lot of my readers subscribe to universal reconciliation, if not dogmatically then hopefully, embracing the view that all created souls will, ultimately, be reconciled to their Creator. And if you hold to that view, even if hopefully, you'll be pondering how Judgment Day fits into this scheme.

I think the first thing to say, and I've said this for years, is that many of those who subscribe to universal reconciliation are perfectly comfortable with hell. One only needs change their view of eschatological punishment from retributive to rehabilitative/purgative. And with that change, Judgment Day really poses no problem.

And if you ponder this series, the view that, in the words of Paul, "each will be judged according to their works," it works really well with a purgative view of judgment and hell. One of the big problems with classic visions of judgment is the binary outcome, 100% saved or 100% damned, which obliterates the moral continuum we know exists between people. But judgment "each according to works" keeps the continuum in view. For example, we've entertained in this series Paul's vision in 1 Corinthians 3:

According to the grace of God given to me, like a skilled master builder I laid a foundation, and someone else is building upon it. Let each one take care how he builds upon it. For no one can lay a foundation other than that which is laid, which is Jesus Christ. Now if anyone builds on the foundation with gold, silver, precious stones, wood, hay, straw— each one's work will become manifest, for the Day will disclose it, because it will be revealed by fire, and the fire will test what sort of work each one has done. If the work that anyone has built on the foundation survives, he will receive a reward. If anyone's work is burned up, he will suffer loss, though he himself will be saved, but only as through fire.

To be sure, there is an exclusivist claim here. Christ is the necessary and only foundation. Those subscribing to universal reconciliation will have to deal with that claim. (A common way is to look at Philippians 2.10-11: "Every knee will bow and every tongue confess that Jesus Christ is Lord.") Still, the vision we've entertained in this series, that salvation can be "through fire" and involve "loss," fits really well with purgative views of hell.
My point here is that the view of judgment entertained in this series--"each according to their works"--actually makes things easier for visions of universal reconciliation rather than harder. Which, in my view, is another attraction of judgment based upon works.
Richard Beck at May 09, 2022
Share