Maps of Meaning with Jordan Peterson: Part 21, Facing the Devil 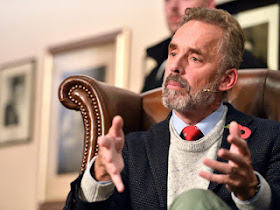 We've now reached the final chapter of Maps of Meaning. But it's a very long chapter, 160 pages, which is one-third of the entire book. The chapter is entitled "The Hostile Brothers: Archetypes of Responses to the Unknown."

The big point of this chapter concerns what is now a familiar theme: How do we confront Chaos and the Unknown? In myth, our response to the unknown/chaos often takes the form of two "brothers" who each represent a fork in the road before us. One brother is the hero, representing the adaptive choice before us. The other brother, who Peterson calls "the Adversary," represents less healthy and functional choices.

Having set out that basic thesis, Peterson quickly turns to the mythology of Satan, the "adversary" of Christ (the hero) in the Christian tradition.

(I expect some discomfort here at a suggestion to consider Christ and Satan to be mythological "brothers." Perhaps a more orthodox take would be viewing Michael and Satan as the angelic "brothers," given their conflict in Revelation 12. Regardless, one gets the mythological contrast that Christ represents a healthy response to life and Satan does not, two forks in the road.)

In turning his attention to Satan, Peterson make the following observation about evil in modern consciousness (emphases in original):

The image of the devil is the form that the idea of evil has taken, for better or worse, at least in the West. We have not yet developed an explicit model of evil that would allow us to forget, transcend or otherwise dispense with the mythological representation. We rationalize our lack of such an understanding by presuming that the very notion of evil is archaic. This is a truly ridiculous presumption, in this century of indescribable horror. In our ignorance and complacency, we deride ancient stories about the nature of evil, equating them half-consciously with childish things best put away. This is an exceedingly arrogant position. There is no evidence whatsoever that we understand the nature of evil any better than our forebears, despite our psychology, even though our expanded technological power has made us much more dangerous when we are possessed. Our ancestors were at least constantly concerned with the problem of evil. Acceptance of the harsh Christian dogma of Original Sin for example (despite its pessimism and apparent inequity) at least meant recognition of evil. Such dogma at least promoted some consideration of the tendency toward evil as an intrinsic, heritable aspect of human nature...The dogma of Original Sin forces every individual to regard himself as the (potential) immediate source of evil and to locate the terrible underworld of mythology and its denizens in intrapsychic space. It is no wonder that this idea has become unpopular: nonetheless, evil exists somewhere. It remains difficult not to see hypocrisy in the souls of those who wish to localize it somewhere else.

As the author of Reviving Old Scratch: Demons and the Devil for Doubters and the Disenchanted, my own argument for why the modern world needs to take the devil seriously, I can only applaud such a comment. This passage is yet another example of how Peterson's Jungian approach can "preach" to modern audiences. In the hands of Peterson, 1 Peter 5:8 gets your attention:

Be self-controlled and alert. Your enemy the devil prowls around like a roaring lion looking for someone to devour.